It’s hard to imagine an Australian Rock scene without the presence of Dead Letter Circus. The alternative rock band from Brisbane have shaped the face of modern rock in Australia and influenced bands’ sounds the world over.

Ten years into a stellar and storied career that started with their exceptional debut EP, they are today pulling back the curtains to unveil The Endless Mile album – an eleven-track LP that features alternative-universe versions of that 6-Track Debut EP, as well as a selection of Re-Imagined tracks from their three LPs This is the Warning, The Catalyst Fire and Aesthesis.

The first single to be lifted from The Endless Mile is the re-imagined “One Step” – available on streaming services this week. The brand new take on the song strips it back to basics – the melody and the lyrics – showcasing vocalist Kim Benzie’s amazing vocal range alongside a beautifully arranged piano-and-strings version of the epic song.

The record was laid down in the summer of 2016/2017, between December and January, with Forrester Savell and Matt Bartlem at Gold Coast’s Loose Stones Studios at the helm and on Production duties.

Wolfmother‘s Ian Peres came on board to play organ and piano across 8 of the album tracks, whilst Chris Carmichael arranged, played and recorded strings on 6 of them.

Vocalist Kim Benzie shares his thoughts on how far the band has come in ten years and what this album represents to them now, looking back on their catalog.

“We had dabbled a little with acoustically interpreting some of our songs before, but we’d always talked about going deeper and completely rewriting some tracks to see if they could exist in two worlds, but of equal calibre with the same depth of emotion. The ten year anniversary of the EP felt like the perfect opportunity for this, but we decided to expand it out to an album and hand picked a bunch of other songs from across the catalogue.

As a concept it sounded fun, but it was actually really an absolute brain melter at times. We’ve always been about chasing the ‘goose bump’ moment when writing and our path to taking people to that moment has been very intense at maximum velocity. It took us a while to find that same doorway in a more spacious musical setting, but we definitely found it with this album.

A lot of the songs on this record had been singles in their previous incarnation so it was tough to pick one to lead with. Ten years ago the concept of a DLC song that is pretty much just piano and vocal wouldn’t have entered my mind as possible. If you viewed the scope of what we can do musically as a pendulum swings, ‘One Step’ is at the furthest end, the inverse of our usual approach and the most bare a track of ours could ever be. In a similar way to the first time this song came to us, from the first note, it just felt so right, and so epic. As the most stripped-back track on the record, ‘One Step’ seemed like the perfect choice.”

Dead Letter Circus‘ ‘The Endless Mile’ Tour will celebrate the band’s much-loved debut EP’s tenth birthday in March (with tickets becoming scarce!) and joining the Brissy boys for the whole run of shows will be Melbourne-via-Cronulla lads, Strangers, also in Acoustic mode. Re-imagining the EP as well as tracks from their extensive back catalog to honour its anniversary,Dead Letter Circus will be playing the iconic tracks with a unique new interpretation in Brisbane, Melbourne, Sydney, Adelaide, Bunbury and Perth in March. 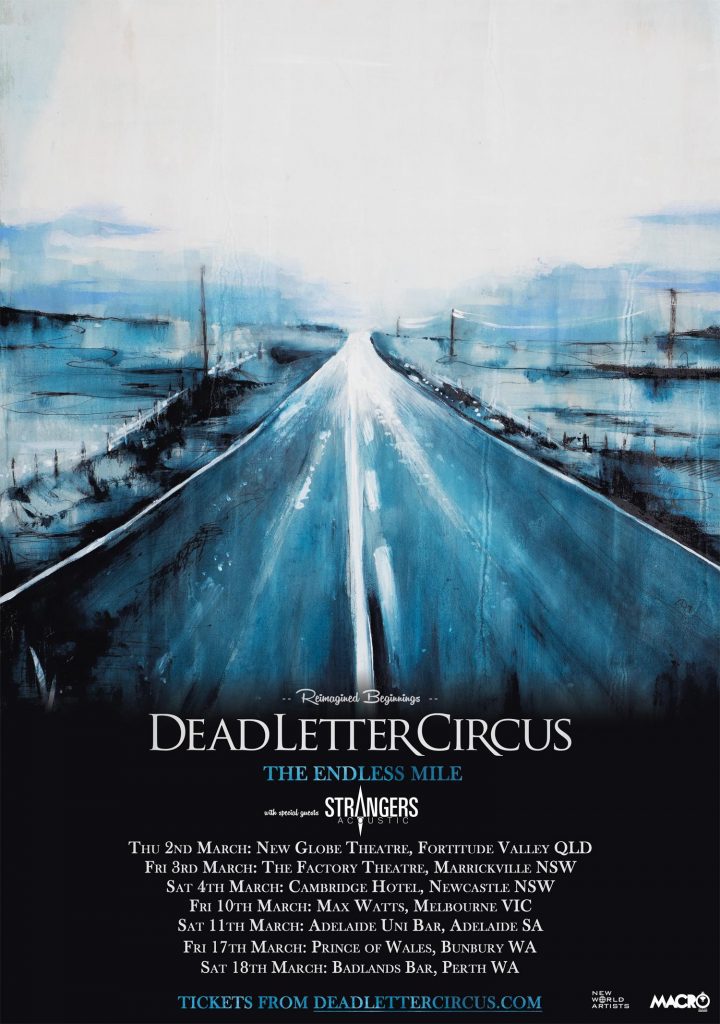