Artists, all in their own right, brought together by a shared vision: to highlight the challenges faced by women in the music industry. A conversation that was prompted 20 years ago with Lindy Morrison’s (The Go-Betweens) film Australian Women In Rock & Pop Music and was continued in 2018 by Claudia Sangiorgi Dalimore and Michelle Grace Hunder, with their independent documentary, Her Sound, Her Story. Sharing their thoughts, united by BIGSOUND, the three artists, through a panel delved into their motivations for making the films, their thoughts on the music industry, what’s changed and the things that still desperately need to.

As both documentaries are about to be released online for the first time, we had a chat with Lindy, and later Claudia and Michelle about their experiences.

Lindy sheds a refreshingly positive light on the topic, having lived through the music industry from the 70s onwards, she has seen it all and is certain progress has been made. 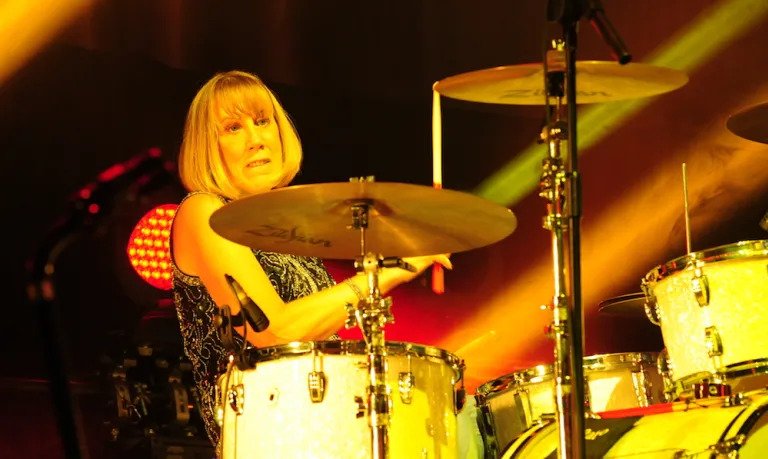 “I think the industry has changed considerably, when i was playing with Alex The Astronaut last year, I found I was completely surprised at how many women there are on stages. A group without a woman in it now is like its own genre- a boy band, a genre of its own because it’s so unusual to see a band without women…That was simply not the case in my day. A woman’s role was that she was the lead singer or backing vocalist,” Lindy explained.

Claudia Sangiorgi Dalimore, producer/director/cinematographer/editor and Michelle Grace Hunder, producer and photographer, began Her Sound, Her Story with their curiosity. While they weren’t actively living through it, they could see, through their own work capturing musicians, that the statistics were an issue, and was something that needed investigating.

Although the pair weren’t aware of Lindy’s resource until “very late in the piece.. About 4 months out from the first film screening”, the recommendation from a friend led them to retrieve a VHS copy from Lindy herself. It acted as a kind of fire-in-the-belly moment to reassure them what they were doing was important, that the conversation was relevant then, and still is now, and that it needs to be continued. 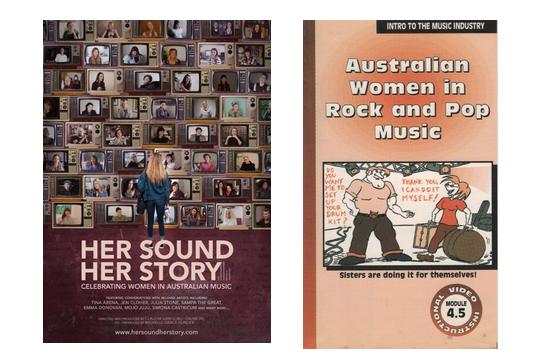 Lindy, Claudia and Michelle are all performers in one way or another. Growing up in Brisbane, Lindy was involved in theatre and playing drums, living in the punk music movement. Lindy explained that there were “three great cities that produced the best punk: New York, London and Brisbane”. The punk movement in Brisbane was brought on by a “particularly authoritarian state government which produced the police state in Queensland at that time…because of this there was an incredibly vibrant dynamic underground and punk music was at the forefront.”

“It was the political performance movement – punk in Brisbane,” said Lindy.

Moving from Brisbane to London and later settling in Sydney, Lindy played drums with The Go-Betweens and Cleopatra Wong, more recently playing for Alex The Astronaut. Dedicating her time to make a positive impact on the industry, Lindy is a social worker for Support Act, the charity for professionals in need, looking after the crisis relief, and also lectures on Copyright, an issue that many of us need clarity on.

Claudia is a dancer, and began performing when she was quite young. She later began working as a music video maker, which is a direct line to the music industry and storytelling. “My skills as a filmmaker came from not studying film- not choosing one element,” Claudia explained, confident that by not restricting herself to one area of film, it has allowed her to master many different skills in film and editing, which shows throughout her work.

Michelle shared her similar path with photography, “we didn’t study, we didn’t know the rules. We get the end result but it’s through our own DIY ways… I had a mentor that told me it doesn’t actually matter [if you’re trained or not] nobody can see the process, they see the end result.”

For Michelle, music has always been part of her life, “I was a musician and a basketball player as a kid,” Michelle explained. She felt that when she first picked up a camera, it was a natural gravitation towards music, “I get musos, I really connect with them. They’re my people.”

Speaking with Lindy gave Michelle and Claudia new hope, “when you’re in the trenches, it can feel like you’re not getting anywhere. It’s important to look at the bigger picture,” said Michelle, suggesting that Lindy’s perspective allowed them to step back and acknowledge the positive changes that have occurred in the music industry.

“It’s an unusual thing to say but I actually love the Australian music industry,” said Lindy, “I find every aspect of it intriguing. I like all the old men even though I understand they’re from a different culture, I love the way women are coming up through the ranks, management, labels. I love meeting the agents, independent labels, publishers- I love the whole industry. It’s a specific and fascinating industry. It’s so good in Australia because it’s so tiny, you get to see every part of it. When we were living in London we only got to see a small part of it. Here it’s so transparent, you see all the ruptures, the fights, the getting back together, I’ve seen it all.”

Lindy is not only involved in the Australian music industry as a great musician, she also enjoys her role lecturing on Copyright, having a “great love for intellectual property and the copyright industry”. She studied a Masters in Legal Studies at UNSW to become more familiar with the language, and when she can, lectures on the topic that many people get confused about. I was interested to hear what Lindy would like others to understand more about copyright (as when I tell people I’m a copywriter they have this awkward pause and say something like “oh yeah so, the legal side of art right?”).

“I wish they knew that there are two separate copyrights – sound recording and musical work (which is the song) a lot of people don’t understand they’re both different streams of income, in fact journalists are the people who understand this least of all, they talk about music copyright without ever explaining if they’re talking about the song or the sound recording,” explained Lindy. She then kindly offered her time if I ever write more in-depth about copyright, that she would be happy to discuss it with me.

Lindy is an asset to the Australian music industry, through her musical contributions, her time spent working with the charity Support Act, her knowledge on copyright shared at universities, and her work on Australian Women In Rock & Pop Music. We should be thanking people like herself that began this conversation for us, in a time when it was so publicly discouraged. It is because of her art, and the voice of others in her time, that we are now taken seriously. However, the conversation is not yet over, as Michelle and Claudia have discovered.

The process of creating Her Sound, Her Story and all that it encompasses proved to be challenging for Claudia and Michelle, who were both working full-time while creating this independent project. The challenges crossed lines of financial, emotional, physical- the amount of work they did was monumental.

Claudia described it as “an art project by two independent artists” that has happened to have brilliant national coverage and attention, already having a level of interest because of the people in it (Tina Arena, Julia Stone, Jen Cloher and many more).

A project like this requires a hell of a lot of self motivation. Something Claudia and Michelle realised throughout the process. If ever they needed energy or inspiration, they’d connect with artists, musicians (either those they’d already spoken to or new connections to interview).

“The human tangible moments of connection is the fuel for everything we do, and still do,” says Claudia.

“I was at a writers camp recently just for women, it creates a very special place that is very powerful,” said Michelle, encouraging others to take up opportunities like this, “some people scoff at female only ‘safe spaces’. I’ve witnessed it a few times now, women let their guard down, they’re free to create and it’s really beautiful”.

As for what Her Sound, Her Story looks like in the future, Claudia and Michelle are currently talking about this, they’re completing a study guide which will be an education package to high schools and universities for the film. “To give back and really get young people talking about all of these topics, that’s the highest reward, we’re actually making change,” Claudia said proudly.

Both Her Sound, Her Story and Australian Women In Rock & Pop Music are set to be released online this week. Watch both films, get inspired, start conversations, shake up the industry with positive change!

We will leave you with lessons for musicians, courtesy of Lindy Morrison:

Her Sound Her Story