Get ready Australia, Adelaide’s Bad//Dreems have today announced that they will be bringing the new tunes from their forthcoming sophomore album GUTFUL, to fans around the country via their renowned, tangled, sweaty and cathartic live shows this June.

With new single ‘Feeling Remains’ released and doing the rounds online and on air, fans are getting a further glimpse into the sonic structure that holds GUTFUL up as one of the most anticipated Australian releases of 2017. Proving to be more than just a rock record, through GUTFUL, Bad//Dreems have managed to express the contradictions of the Australian condition: defiance and despair, solitude and tribalism, gentrification and decay.

The album was recorded by production team Mark Opitz (INXS, the Angels, Cold Chisel) and Colin Wynne at their West Brunswick studio over 2016. It was tracked live to capture the precarious energy of a Bad//Dreems live show. Guitars circle and swoop on a mercilessly propulsive rhythm section: JAMES BARTOLD (bass) and MILES WILSON (drums). BEN MARWE’s voice is smoke-soaked and viscerally emotive. ALEX CAMERON’S guitar sends up fragile melody fragments that disintegrate into, and emerge out of, raw noise.

The release of Dogs at Bay saw Bad//Dreems championed as one of the country’s most exciting guitar acts, drawing plaudits from sources as varied as Robert Forster (Go Betweens), At the Drive In and the Avalanches, both of whom invited the band to support them on Australian tours.

Joining the band for the national run will be Brisbane indie-pop powerhouse The Creases.

With GUTFUL, Bad//Dreems go from one of Australia’s most exciting acts to one of its most urgently important – don’t miss your chance to see them live as they hit your town this June. Tickets are available on the band’s website from 9am Thursday 16th March. 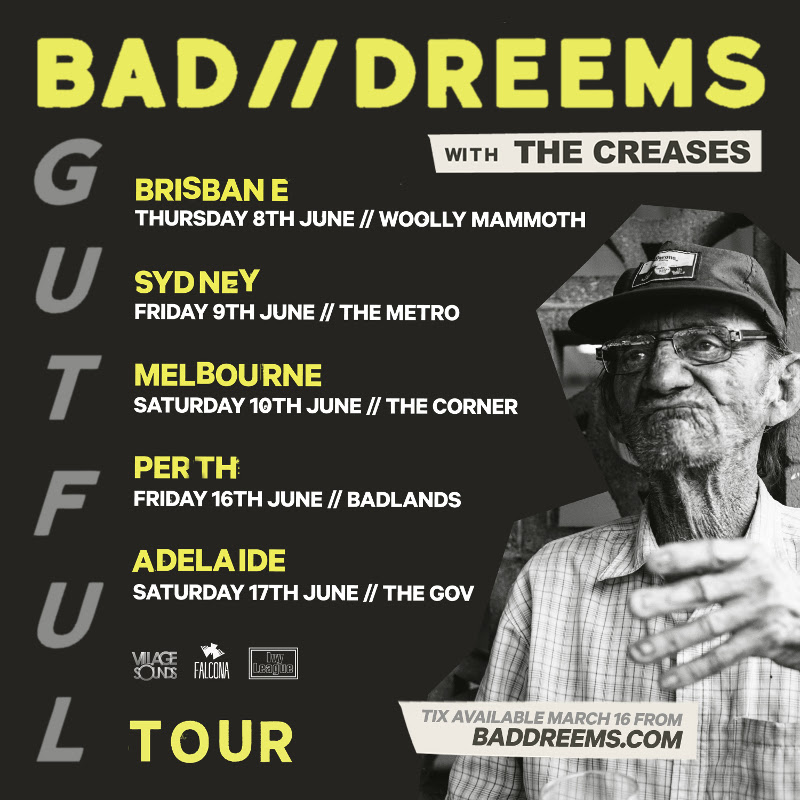