Directed by Tobias Willis (KEWL) and Zachary Bradtke (BANALARAMA), and premiering via Wonderland Magazine, the video expands on the grand Client Liaison narrative. In what is the duo’s most ambitious clip yet, ‘Off White Limousine’ reveals that in the chess game of international diplomacy, for every move you make, for every advance across the board, a counter lies in wait. Those with Diplomatic Immunity, however, will always prevail.

Of the video, Wonderland Magazine appraise: “Client Liaison now present their latest music video extravaganza: “Off White Limousine.” Working more as a short film – be prepared for an assassination attempt, Game of Thrones’ Hodor and an abundance of fabulous outfits that would have you wishing for an hour long special.”

In conjunction with today’s video release, and following the success of their debut record Diplomatic Immunity and their Designer Line, Client Liaison PTY LTD add a new arm to their enterprise, entering the Taxi and Limousine Transport Industry – A Limousine Service Courtesy of Client Liaison. Morgan & Miller have neither confirmed nor denied Kristian Nairn (Hodor/ Game of Thrones) to be their full time driver, but guarantee a top tier experience none the less, with the plan to offer this service in Melbourne/ Victoria and potential expansion to other states in the near future.

Expressions of interest are now available via: www.clientliaison.com/limousine

Diplomatic Immunity is now available as double gatefold vinyl in off white. 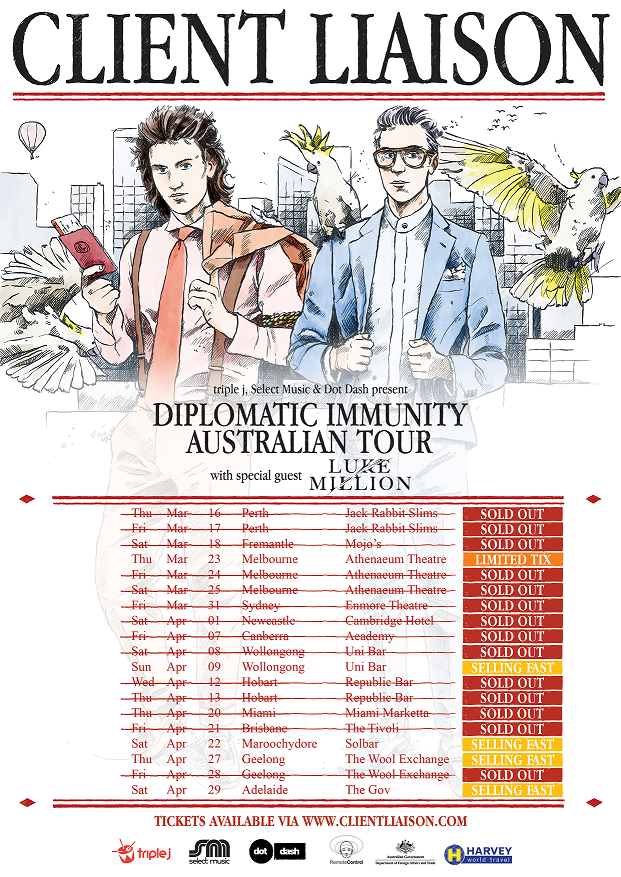