Pool House Records and Remote Control Records are thrilled to announced the signing of Melbourne’s Jess Locke. She is the first addition to the Pool House family since the label was founded by Melbourne’s The Smith Street Band in November of last year.

To mark the occasion, Jess has shared a new single ‘Better/Bitter,’ which premiered last night on triple j’s 2017 with Richard Kingsmill. Taken from an album due for release later this year, ‘Better/Bitter’ is a perfect encapsulation of Locke’s captivating ability to match dreamy guitar pop with a lyricism cut with stark commentary. It’s a sound and an unabashed candidness that has developed through the long time Jess has performed in unconventional spaces: water parks, cemeteries, roundabouts, bookshops and back porches. It’s only natural then that the intimate nature of her live performance style lies at the crux of her recordings.

Having toured in support of Paul Dempsey, Tigers Jaw (USA), Into It. Over It. (USA) and Julia Jacklin, Locke has already won crowds over with her live shows. More recently, Jess and her band shared the stage with The Smith Street Band on their national tour. Now label-mates, it’s a stage that will be shared in more iterations than one.

Pool House Records’ Chris Cowburn says of Jess: “We have loved and admired Jess Locke for some time now. We were all very taken by her beautiful, laid back songwriting, and by her and her band mates as wonderful people. Both in her music and her persona Jess has a way of being effortlessly cool (something none of The Smith Street Band could ever pull off!). We’re so excited to welcome Jess to our little community, and so proud that she is our first artist who isn’t Smith Street… which makes Pool House Records feel like a real thing! Thanks Jess!“

Jess shares the natural affinity: “Smith Street have always been really supportive and helpful. Even before Pool House… they took us on tour with them last year and when our recording plans fell through we just bashed out a song with Fitzy in a rehearsal room. And that sounded good so we recorded a whole album with him. When they started Pool House and offered to put it out it just made perfect sense. I feel like our attitudes toward music are pretty aligned. It’s about putting good honest stuff into the world, and building a community around it.”

On top of todays signing announcement and single release, Jess Locke has also revealed dates for her‘Better/Bitter’ single tour, hitting Melbourne, Sydney and Brisbane in May. Full dates and info below including New Zealand tour dates for later this month. 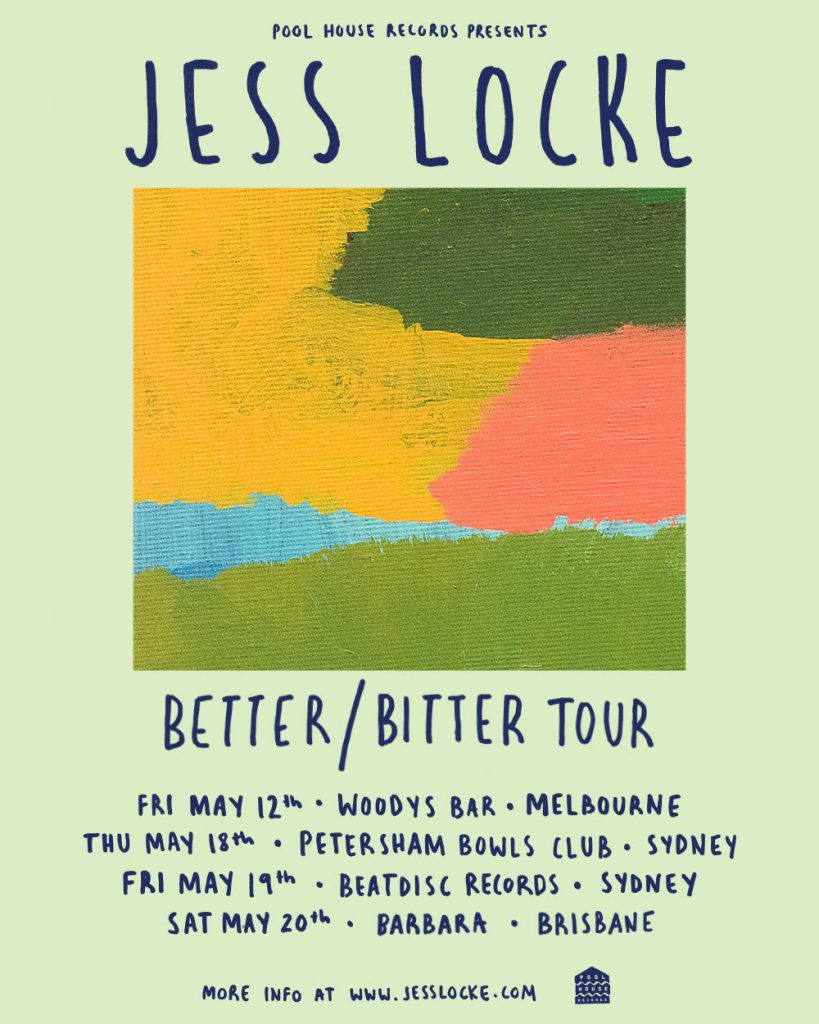