US post hardcore legends, The Red Jumpsuit Apparatus will be returning to Australia this May for a national headline tour as part of their Don’t You Fake It –10 Year Anniversary World Tour.

Fans all over the country will be eager with anticipation at catching one of the leading lights of the scene celebrate their iconic release by playing it IN FULL from start to finish!

This is a once in a lifetime opportunity to hear every track on Don’t You Fake It back to back, in order and how you remember it. Definitely a bucket list item for die hard fans!

The RJA story goes back to 2003, actually much further back to when brothers Ronnie and Randy Winter first started playing on acoustic guitars their grandfather gave them, but we’ll skip the ‘they learned to play and formed a bunch of bands that ultimately lead them down the path to glory’ bit and jump in where they were making so much noise that it attracted Virgin Records who snapped them up released the bands debut LP, Don’t You Fake It in 2006.

By the end of that year the album was certified Gold in the US, charted the singles Guardian Angel and their best known song, the anti domestic violence focused, Face Down (which is also featured in several video games) and spawned four music videos. A deluxe edition was released in early 2007 featured the track Disconnected which up until then was only available to Australian fans.

Second album Lonely Road followed in 2008 but the collapse and restructure of Virgin Records soon after left the band out on a limb and they became fully independent in early 2010. Being independent they regained full creative control and RJA’s sound and vision was able to grow as intended. Since then it’s being done the Red Jumpsuit way, Am I The Enemy was released in 2011 and album number four, 4 in 2014. All charting, all pushing RJA’s message further around the world.

Known for their devout Christian beliefs, the bands spirituality flows through their lyrics which cover a lifetime worth of emotions. The darkness and the light, the struggles and the wins. The RJA message is ultimately one of hope and a reminder that ‘Even on the worst day that you’re alive you’re still surrounded by so many awesome things that you should be grateful for, if you choose to look at them.’ Ronnie Winter

Joining RJA on all shows will be Brisbane’s Young Lions
The five piece have played their way to the forefront of the Australian rock scene. Their alternative edge and instantly recognisable sound has led to them sharing stages with major international bands like The Almost, Sense Fail, Adept and they are equally at home playing with Aussie bands as diverse as Dead Letter Circus, Jebediah and Feed Her To The Sharks! Plus their own headline shows have earned a loyal following and they continue to build a reputation for their live performances.
Everything their fans have come to love about Young Lions; Passion. Truth. Relevancy is laid bare on the stage and through their music.

The Red Jumpsuit Apparatus will be here in May, do not miss it! 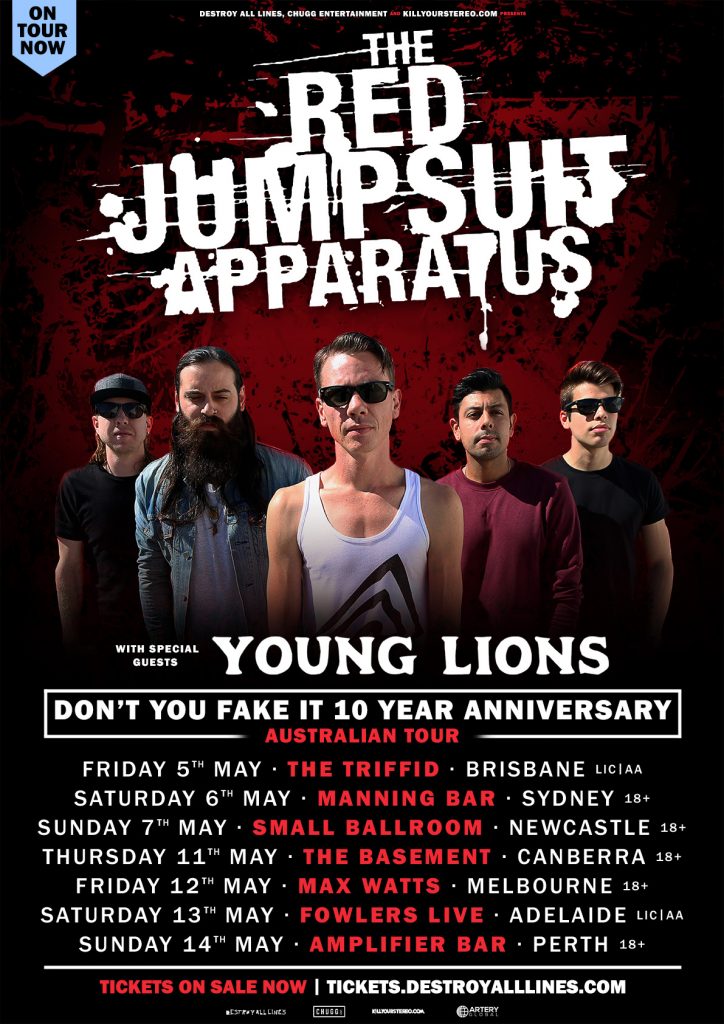