[INTERVIEW] Tyler from Luca Brasi: “If you can’t express yourself in any way other than hurting someone, then I don’t understand what you’re doing at a show”

Exploding into popularity with their latest record If This Is All We’re Going To Be…, Luca Brasi have hit 2017 running. With a Hottest 100 appearance, sets at Laneway Festival and Party in the Paddock, plus announcing a huge national tour for July, the Tassie outfit have a huge year ahead of them.

We sat down with Tyler Richardson (vocals, bass) on International Women’s Day to talk festivals, Tassie, #ItTakesOne and what needs to be done to make the music scene safer for everyone. And of course, about the inevitable Essendon AFL Grand Final appearance.

Steve Hackett, as the powerhouse guitarist for inarguably one of the most important progressive rock bands ever, has been a guiding influence for musicians and guitarists for over 40 years.

Genesis, only ever made it to Australia once, in 1986 – years after Steve and singer Peter Gabriel left the band, so Steve is making it up to fans by bringing some Genesis magic to our shores.

Ahead of their appearances at Groovin The Moo, Violent Soho have dropped the video for the first song off their breakthrough album WACO.

Directed by Tobias Willis (KEWL) and Zachary Bradtke (BANALARAMA), and premiering via Wonderland Magazine, the video expands on the grand Client Liaison narrative. In what is the duo’s most ambitious clip yet, ‘Off White Limousine’ reveals that in the chess game of international diplomacy, for every move you make, for every advance across the board, a counter lies in wait. Those with Diplomatic Immunity, however, will always prevail.

FATMAN SCOOP returns to Australia this April for ‘Sunrise’ Tour

Following on from an incredible run at Australia’s biggest RnB party – RnB Fridays Live comes the much anticipated return of America’s favourite hype man – Fatman Scoop, for a stack of shows in Australia and New Zealand. The New Zealand leg of the tour marks Fatman’s debut performances in the country with support coming from UK beat man DJ Bluey.

The countdown has well and truly begun for Billy Bragg’s one-off and much anticipated Adelaide solo show. Due to high demand, the show will now be held at The Gov in Adelaide on Monday 24th, April 2017. Joining Billy Bragg on this very special night will be Melbourne based female folk/pop duo, Oh Pep!

Melbourne’s heavy experimental creatives Orsome Welles will be releasing their long awaited new EP titled Rise on May 26. The band will touring nationally in support of Rise across June and July.

Rise has been a long time coming, with its first two singles Build A World & Maestro released towards the end of 2016.
Both songs caused quite a stir among industry and fans alike with their striking videos being produced by acclaimed film-maker, Adrian Goleby.
Adrian will once again be at the helm for the next visual feast to be served up by the band in the very near future.

Northlane have released their new stand-alone single “Citizen” today. “Citizen” was recorded by David Bendeth (Bring Me The Horizon, A Day To Remember, Paramore) at his studio in New Jersey. The video for “Citizen” was filmed by Jason Eshragian who has previously worked with Northlane on the “Intuition” and “Impulse” videos.

“Citizen is a song that was written about the First World police state and our willingness to live under the watch of those in power, for their means, while those who blow the lid on it suffer,” explains Northane guitarist Josh Smith. “Writing this one was quite a mission, we went through five completely different sets of lyrics and the final incarnation of the song was the eighth revision. It took a lot of work but we are proud of it and beyond excited to share it with you all.”

“Citizen” follows on from their previous track “Intuition” which was revealed as a surprise gift for fans during their headline set at UNIFY 2017. Northlane will continue to hit festival stages throughout 2017 with appearances on the main stage at Download Festival (UK) and Hellfest (France). The band will also play at Vainstream Rockfest (Germany), Jera On Air (Netherlands), Graspop (Belgium), Dissonance Festival (Italy), Rock For People (Czech Republic), Resurrection (Spain) Hammersonic (Indonesia) as well as Big Pineapple Music Festival here in Australia.

Before Northlane take off to the Northern Hemisphere, local fans can catch the band hitting up the regional hot spots around the country with Hands Like Houses. The full list of local supports can be seen below, and includes some familiar faces in Void of Vision, Saviour and The Brave. 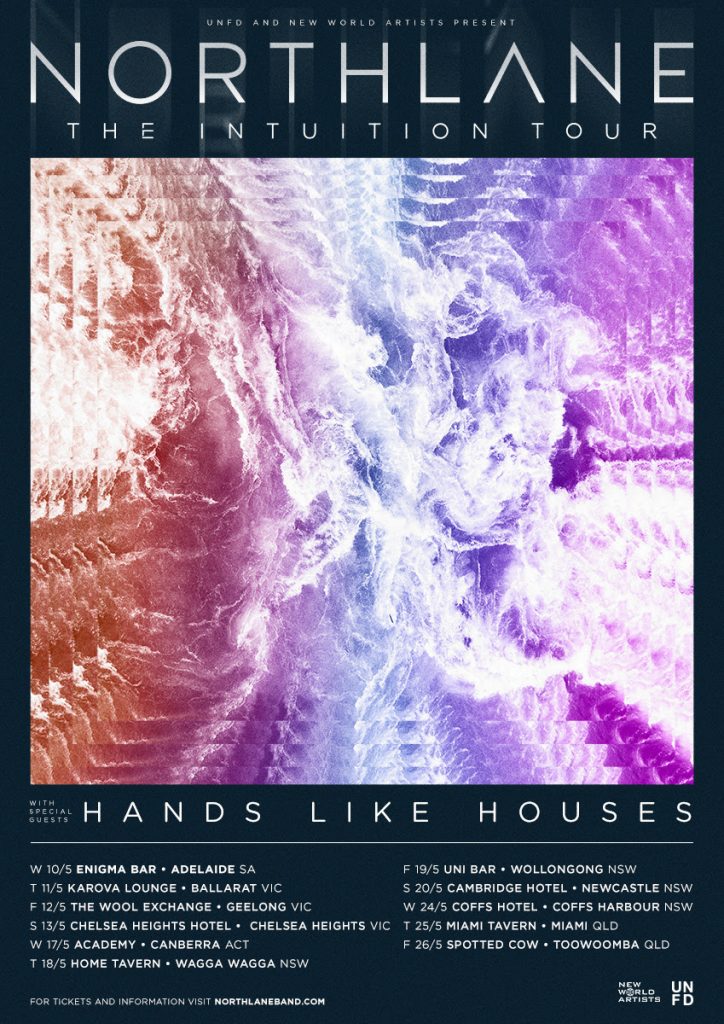 “Mighty” is a word that comes to mind when attempting to describe Brisbane stalwarts Screamfeeder. For something like 20 years now, the band have put the emphasis on “power” in both power trio and power-pop. They get their hooks in early and they don’t budge for the entire time they’re on stage – and even in the waking moments after they’ve finished for good measure. Truly, when one talks of Screamfeeder one talks of one of the most underrated bands this country has ever produced. In a just world, these merchants of garage-dwelling indie exuberance would be receiving Enmore-sized elation entirely on their own merit. For now, however, it’s just great to see them charging purposefully through both some beloved classics and hugely-promising new material.

The Meanies, meanwhile, are fish out of water – a pub-friendly punk band in the surrounds of one of the oldest theatres in the whole country. Still, the Melbourne band have been outsiders their entire lives. Fearless frontman Link Meanie makes like the proverbial fish and splashes about the place as if his life depended on it – and although he’s not bleeding profusely or stagediving onto some unsuspecting punters, he’s still injecting the room with as much punk energy as he’s able to muster. To his left, Wally Meanie thunders through buzzsaw bass-lines and cracks wise in-between songs, refusing to let the spectacle of their surroundings change the fact that – at the end of the day – it’s still a bloody Meanies gig.

By 1996, Spiderbait were well on their way to becoming the most sought-after rock band on the Australian circuit. The album that got them there was their third, Ivy and the Big Apples. 2017 marks its 21st birthday – and, true to their rural upbringing, Ivy has decided to have a night on the town for her 21st with 2000 of her closest mates. The album’s singles set the dancefloor alight – Hottest 100 winner “Buy Me a Pony,” the double-sided pop joy of “Calypso” and the mane-thrashing sugar rush of “Hot Water & Milk.” The album’s deeper cuts, meanwhile, complement the hits on behalf of the more dedicated fans – “Joyce’s Hut,” for instance, features a scarce rarity of guitarist Damien “Whitt” Whitty performing lead vocals; while instrumental “When Fusion Ruled the Earth” has bassist/vocalist Janet English switching over to guitar to further layer Whitt’s thick fuzz.

A victory lap arrives upon the album’s completion: “Old Man Sam,” “Fucken Awesome” and, yes, “Black Betty,” which sends the party to the next level thanks to their extensive jamming, along with drummer/vocalist Mark “Kram” Maher’s expert call-and-response. Tonight may have been such a 90s bill that one was half-expecting Dylan Llewis to host the thing, but there’s a lot to be said for how vital all three of these bands still sound and how greatly they deliver in the live setting after all these years. To borrow from their lyrical arsenal, Spiderbait are a big-time entity with their place in history.

The four headed multi-genre party beast known as The Bennies are back with a new clip from their critically acclaimed third album Wisdom Machine. Currently blasting up the east coast of Australia supporting childhood heroes The Living End on a 20 date mammoth regional tour – The Bennies present their biggest clip yet for the politically charged Black Sabbath Inspired new single ‘Corruption’.

‘Corruption’ was Directed again by Neal Walters, who has worked on the previous two Bennies clips for ‘Detroit Rock Ciggies’ and ‘Burnout City’.

Alongside The Bennies funnest clip yet is a special digital only single, which includes a new extended version of ‘Corruption’. Reaching the seven minute mark the track features The Bennies regular live DJ Snes Mega and his group Dedmedics.

The four headed multi-genre party beast known as The Bennies are back with a new clip from their critically acclaimed third album Wisdom Machine. Currently blasting up the east coast of Australia supporting childhood heroes The Living End on a 20 date mammoth regional tour – The Bennies present their biggest clip yet for the politically charged Black Sabbath Inspired new single ‘Corruption’.

‘Corruption’ was Directed again by Neal Walters, who has worked on the previous two Bennies clips for ‘Detroit Rock Ciggies’ and ‘Burnout City’.

Alongside The Bennies funnest clip yet is a special digital only single, which includes a new extended version of ‘Corruption’. Reaching the seven minute mark the track features The Bennies regular live DJ Snes Mega and his group Dedmedics.