BAD//DREEMS seem to be grouped into the pub rock genre, but I say they’re in a league of their own. Watch any live performance and you will understand why such labels undermine their existence. Their new album, Doomsday Ballet, set to be released next month, sees the band develop their sound, with the guidance of Burke Reid and Jack Ladder. We sat down with BAD//DREEMS at BIGSOUND to talk about their new album, what it’s like living in different cities, and their time supporting Midnight Oil, which turned into a conversation about hot bagging. Not sure what that is? I’ll let the band explain…

Miles: The band 100, from Sydney. I have a major jones for their songs ‘Cortisone’ and ‘Just Us’, I think they’re bloody clever, tasteful and with the perfect amount of c**t about them. I’ve already gone way overboard and inboxed them on insta to request several one hunnid branded garments.

You’ll be releasing your album DOOMSDAY BALLET on Oct 18th (my birthday- thanks guys!) tell me what the writing and recording process was like for you. Did you find it any easier this time around?

Ben: It was strenuous. What star sign is that?

Ben: Do you believe in star signs?

Brooke: Not really, is that a bad thing?

Ben: We don’t know that it matters, anyone can find parts of a star sign and relate it to them.

Miles: Actually, yes [being easier this time around]. The band is currently split between living and working in SA and VIC. So, the situation kind of prompted a systematic approach to writing the album – whereby we’d organise these immersive band weekends. We’d go to Wellsy’s joint (Ali Wells) down by the beach at Grange, in Adelaide – and churn out demos. Because we had a studio setup at Wellsy’s, the rhythm section were able to lay down a dossier of bare-bones parts that Benny, Ali and Cammo could later overdub during the week when they knocked off their respective working days. Then the following weekend we’d do the same again, until we had a collection 40 odd, well produced demos. Strangely, living separately made for a super fluid album writing process. Benny and Alex are always writing stuff at home too, so they’d always show up with new and well thought out additions. I’m just the lucky passenger here, in many ways.

You are all living in different cities these days, how did that affect the recording process?

Miles: I guess it made our time together more enriched and fruitful.

Alex: It made it a bit more sophisticated, we had more time to work on the vocals and guitar parts.

What was it like working with Burke Reid and Jack Ladder?

Miles: Shit hot. Those guys are incredibly talented and their knowledge of music is encyclopaedic and although we slogged out consistent 14 hour days, they always made it feel exciting and enticing. They’re spirited guys, and awfully lovely too. We’d order pizzas and stuff and take a break from the recording for a bit each night – I remember thinking; God these guys are funny, I wish my mates could hang out with them, they’d love them. We all have a similar sense of humour and taste in music, so I felt we really clicked fast. I liked their approach to my drum parts too, I felt like a total luddite, but they made the breaking down and rebuilding of the drum parts super exciting for me. Going through interesting influences like Devo, Gang of Four, NRBQ etc. and listening to how they structure their parts and percussive accents. It was just a whole new world of perspicacity.

How did their approach influence the sound of the album?

Miles: For mine, it was the meticulousness they both had. Their attention to detail. Their wanting to make each part more interesting and unique. They are really quite incredible minds. Ladder would sometimes be noodling away and suggest, for example, that maybe the chorus could go to ‘this chord’ *noodles out this amazing part perfectly on an acoustic* and we’d be like…..absolutely, that is absolutely where it should go. haha. and it would be spot on. He was a huge help in that regard. Both Ladder and Burke can drum too, so I was really in over my head. 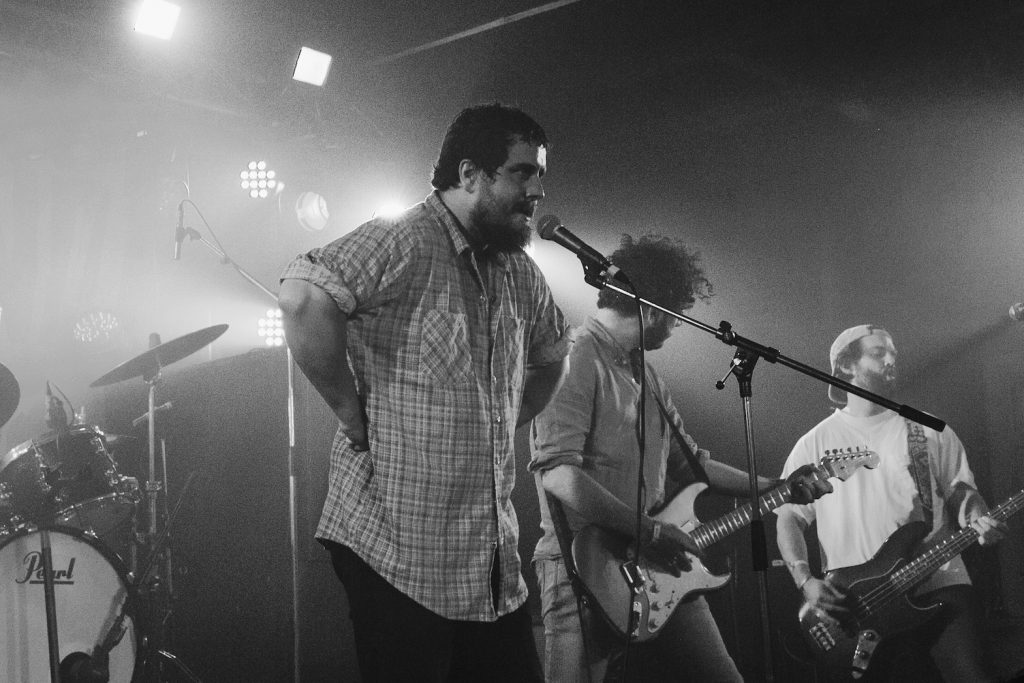 Doomsday Ballet hosts number of ballads, moving away from the classic pub rock sound you guys have. Was that a purposeful move? Or a natural progression?

Miles: I suppose purposeful. Our motto in the studio with Burke and Ladder was ‘Less Pub, More Art‘ and we really tried to adhere to that. I think this time around the ethos really lent itself to more ‘song writer’s songs’. Ballads that told stories and had the parts sweated over. Songs that were torn down and rebuilt over and over again to make sure each progression felt right. I think that type of diligence, for Bad Dreems, results in more ballads. We slowed songs down, we let them breathe. We gave life to the chords in new and exciting ways, with sparsity and sonics – whereas five years ago, we would have just flown into songs like one of those fire hoses on the loose that you see on youtube, and a song that could have been beautiful is instead pigeonholed as boorish pub rock.

Alex: The first time [the pub rock label] was mentioned was by some terrible review and it used it in a derogatory sense, the term itself is stigmatised because lots of those bands got so big and the audience can be a bit too mucho but a lot of the music is awesome. Burke and Jack Ladder enabled us to expand our sound- Devo, Television, Wire, they’re all influences but we never translated that into the recordings. The nature of music, you generalise and put labels on it, we embrace but challenge these labels- we did this with pub rock.

Do you ever find being labelled as a pub rock band over simplifies your music?

Miles: Ummm Yes, I think the term is misleading and tainted. If, by ‘pub rock’ you mean bands like Acca Dacca and Cold Chisel, then yeah great – happy to be in that category, of course. But it seems to label a band ‘pub’, is to also trivialise the songwriting and caliber of those bands, which seems a little unfair. That is my perception anyway. The term is synonymous with loutish, shit and basic music whereas history would tell us that those very bands are successful as a result of the exact opposite of that. But we do go to the pub… and we do play in pubs. We enjoy cripsy, cold beers. So, fair enough – we won’t lose sleep over it. Jeez that was a real stream of consciousness there.

All of you guys have day jobs, how do you manage to hold down jobs and tour?

Miles: Good question. Almost everyone asks us that. We have supportive bosses for the most part and we’re always transparent with wanting to play music and that it means a great deal to us, and our happiness. Once they know you’re serious about it, they seem to be onboard. If they weren’t, we probably just leave. But it’s tough, we get a lot of red-eyes to work and fly home Sunday nights a lot, in fairly fragile states. But so far so good, we like working and having music as a cathartic thing. 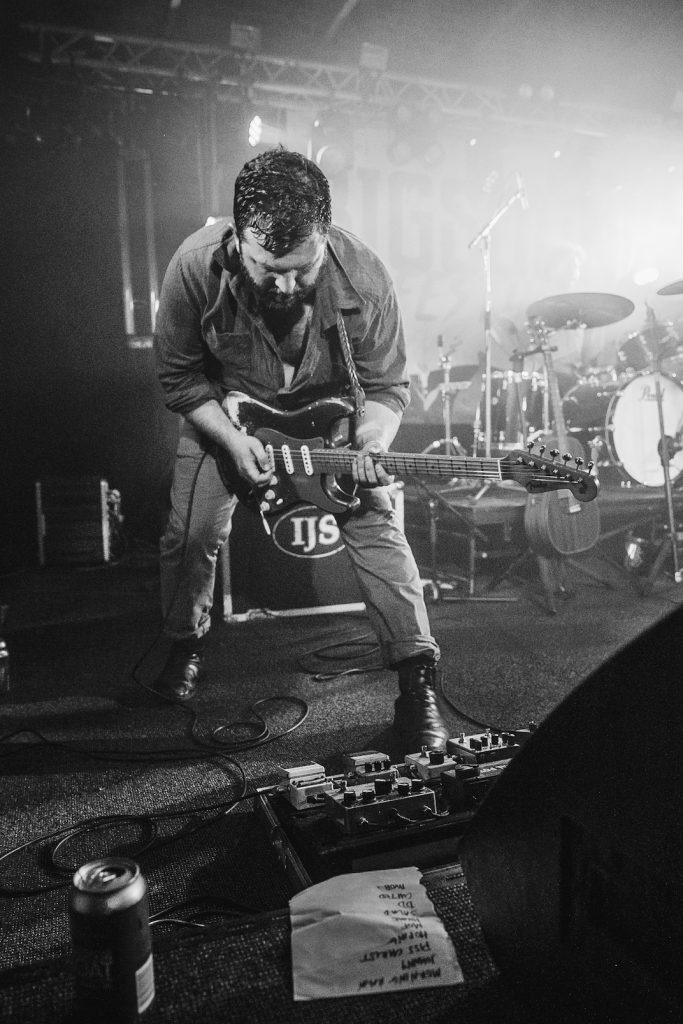 You recently opened for Midnight Oil in the UK, what was that experience like?

Miles: Pretty intense on the old noggin. Hard to get your head around. You’re opening for this band that you, your parents, your grandparents and all your friends know and respect. They mean as much to aussies as the success of the Australian test cricket team in the ashes, it seems. Then they’re huge in the UK too? It was an honour. They’re such good musicians and their live show is elite – it was kind of embarrassing to be honest. But they were such tremendous people. They’d come into our dressing room and just have a yarn for half an hour before each show. They just liked chatting – and knowing what people our age get up to these days. Asked how to use Facebook properly and stuff, it was funny, Garrett is just like my dad.

James: You don’t expect it will ever happen. It was a cool experience, ruined by Miles, hijacking the entire conversation with Peter Garrett…

Miles: Have you heard the term hot bagging? I was only introduced to the term a few days earlier- Panic! at the Disco doco (Alex chimes in: Panic! at the Shitsco), they all tour where they sleep in bunks on a bus, golden rule that you don’t do a number 2 on the bus because it’s frowned upon. So they get plastic bags and sheathe the bowl and make a deposit and then they tie it up and dispose of the bag and that’s hot bagging.

James: We’re meeting our musical hero, general tour chat, bit of a silence, then Miles “ do you practice hot bagging,” Peter Garrett says “excuse me” so Miles was stuck in having to explain it. Anyway, Peter Garrett doesn’t hot bag… and he doesn’t like us anymore.

So playing with Midnight Oil was great. The venues, the academy in Manchester, Buns (Miles) was checking the drums in an empty room that big there was a 4 and a half second delay…this is big.

Alex: Sitting in the audience listening to [Midnight Oil] soundcheck, listening to songs so iconic and integral in your life. They’re a once in a generation band.

Who do you look to for musical inspiration?

Miles: mmm lots of people/bands. I try and make a point of listening to all different genres, to get a broader sense of what’s out there and what might be able to influence my playing. For me as an individual, I like drummers like Jim White and Stephen Morris – I like how they play the drums with real feeling an individuality.

Is there a venue or place in the world you’d love to perform at?

Miles: Alexandra Palace has always seemed amazing. Maybe Uluru too, that would be really cool. Or any outdoor show in the outback with the red earth, providing it was welcomed. Love that idea.

What are you most excited about coming up for BAD//DREEMS?

Miles: I’m just excited to get this record out there. It’s been a long time coming and myself and the band are very proud of the final product. Everyone hearing it and (hopefully) gaining some sort of joy from it, that is what i look forward to most.

Alex: We’ve got a lot coming up. Yours & Owls Festival, SANFL Grand Final, tour in October and November going to capital cities, then heading to England, playing festivals over the summer. We’ve taken a bit of time to replenish our batteries over the last few years so ready to get back out on the road.

Photos and words by Brooke Tunbridge.