Following the whirlwind response to their latest earworm ‘Jellyfish’, anthemic punk-rockers Slowly Slowly are backing up the momentum with the announce of a national single tour. After premiering on triple j and swiftly finding the stage at Good Az Friday performing Like A Version, ‘Jellyfish’ has proven to be one of the most commanding tracks of the year. Currently sitting at #2 on the most played tracks currently spinning on triple j, the reveal of the headline tour continues to see Jellyfish fever take over the country.

“We are so pumped on this tour,” says Slowly Slowly frontman Ben Stewart. “We have been in some exciting, but scary situations lately with the RHCP supports, Like A Version and the arena tour with Amy Shark – we can’t wait to blow off some steam with some headline shows. Melbourne winter sucks, we are coming in hot for a visit to try some new material out.”

The first taste of new music since their revered 2018 LP St. Leonards, ‘Jellyfish’ seizes Slowly Slowly at their most vulnerable and uninhibited. While toying with some meaty questions on love and existential dread, the track is all the while playful, lighthearted and downright catchy. With Stewart’s masterful lyricism front and centre as always, ‘Jellyfish’ makes for a masterful release.

Slowly Slowly will kick off the Jellyfish single tour in July by holding down the Splendour In The Grass stage, before they take to the usual capital city suspects as well as Adelaide, Hobart, Canberra and Fremantle. Joining the tour as support comes Perth punks Sly Withers and Canberra indies Teen Jesus and the Jean Teasers. 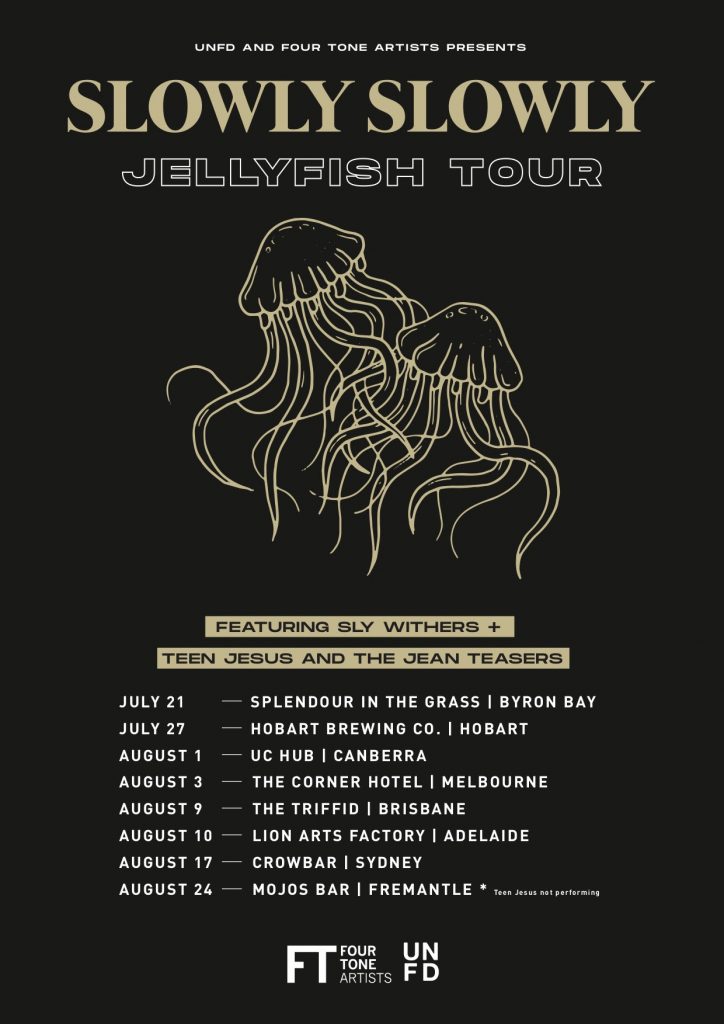 GENERAL TICKETS ON SALE 9AM AEST
THURSDAY MAY 9