Professional party starters The Gooch Palms will bring their infectious brand of good-time garage rock to the masses this August as they take their new album ‘III’ on tour.

Spending the first part of 2019 traversing the US after their stellar SXSW performances, the band return home new album in tow to grace stages from Sydney to Melbourne, from Adelaide to Perth and everywhere in between.

Joining them on tour will be fellow Novocastrian rockers Surf Trash, who recently wrapped up their own sold-out tour around the country.

Goochies can’t contain their emotions “Saying we’re excited is an understatement!!! We can’t wait to tour this new album and for all you guys to hear the new songs live! Continuing “We will be stacking the setlist with everyone’s favourite Gooch Palms hits from years past plus all the fresh bangers off the new album. Being able to play our songs to a live audience is the only reason we’re even in a band and it’s been way too long since we’ve been around Australia!!! Can’t wait to be back on the road partying hard every night with you all!”

Recently announced on Yours & Owls this October, the fuzzed-up duo will also travel around the nation supporting Grinspoon.

The band released their long-teased third studio album ‘III’ in May which yielded singles ‘Busy Bleeding’ featuring TOTTY’s Kelly Jansch, ‘Marfa Lights’, ‘Summertime’, ‘Are We Wasted?’ and ‘Coast To Coast’ which was most recently added to triple j. There are some new sounds and some classic Gooch Palms moments but all in all, it makes for one hell of an album and the pair have never been so stoked! It captures the best of the duo’s notoriously wild live shows with Kat commenting “It’s a journey, we like to take people on a journey“.

Late last year the Goochies joined mates DZ Deathrays for their killer triple j Like A Version of ‘Loveshack’ which quickly became a fan favourite, clocking over a combined 390,000 views to date. View it here.

Get your dose of The Gooch Palms live this August. 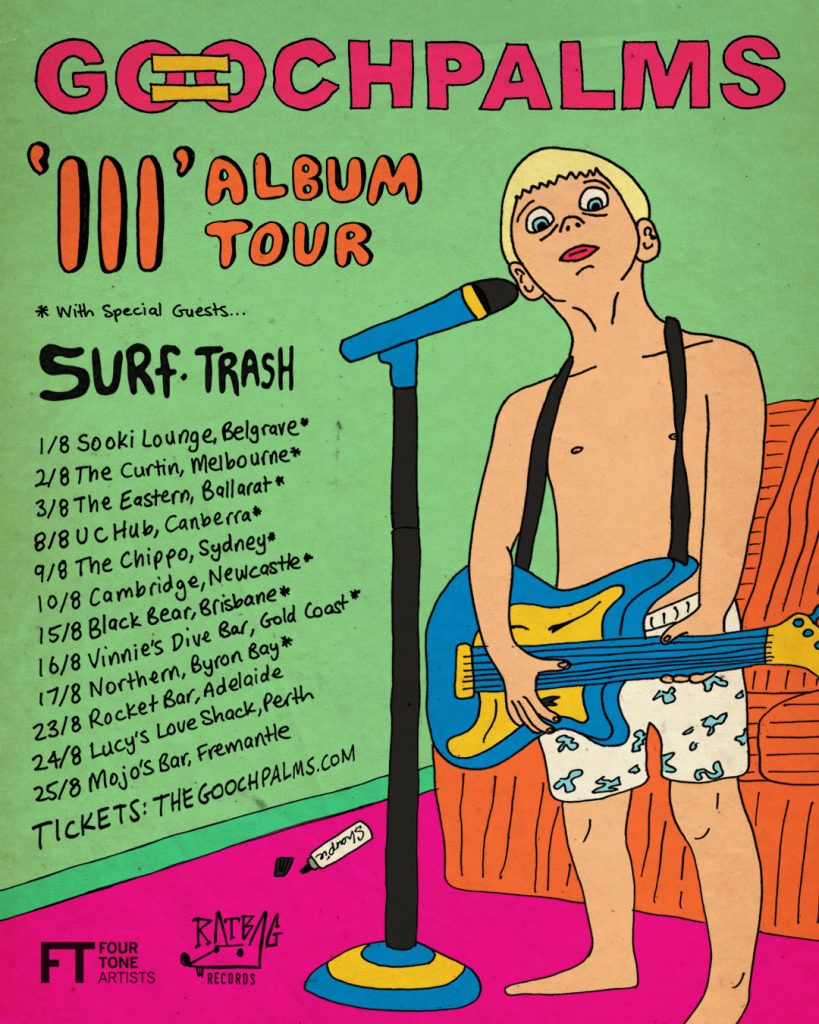 THE GOOCH PALMS
‘III’
OUT NOW
via Ratbag Records/BMG