I’m just going to say it. Anyone boycotting the vote in this bullshit postal plebiscite is worse than Tony Abbott. He may be a homophobic piece of shit, but at least he’s standing up for what he believes in. This is your chance to shut him up. Are you really going to roll over and let him win again?

Of course, I’m no idiot, I know you don’t want to have to ask all of Australia permission to express your love in public. But I’m not telling you to do that. If you can’t bring yourself to campaign for your own human rights, I’m not going to judge you.
You have allies. You have friends. We will campaign for you. We want what you want, and we will fight harder than that vocal minority of small-minded zealots.
No one who is actually for marriage equality wanted this campaign, but, considering how committed this government is to blowing $122 million on a plebiscite that is set to make allowances for vilification, hatred and corruption, we have to work with what we’ve got. The religious extremists don’t want you to vote. They’re campaigning for apathy. They’re shifting the goalposts to make it a battle of left versus right, political correctness versus freedom of speech, spineless ex-banker versus Prime Minister-in-exile.
The fact is, if the “No” campaign wins this plebiscite, it’s game over for marriage equality in this country. They will say this was a resounding response from the Australian people, this nation does not want to change the natural order or God’s word or some such garbage.
When the “No” campaign won in 1999, it ended any discussion of a Republic for a generation. Should “No” win this year, even if Bill Shorten legislates marriage equality in 2019, it will be undercut by this vote. It will be seen as invalid.
This nation tends to respect the outcomes of elections. Abbott fought hard to undermine Gillard after the 2010 election, but at the end of the day, she was PM and he wasn’t. If Abbott wins this time, he’ll undermine the entire LGBTIQ+ community.

If there is one thing we know about conservative extremists, it’s that they always turn out to vote; and considering they designed this particular poll to give themselves the edge, we know that their campaign against marriage equality will be relentless.
THIS. IS. THE. FIGHT. THEY. WANTED. They made it voluntary to reduce the turn out. They made it postal so they could manipulate the results and the will of the people. Our only chance is to make them lose.
All you have to do is vote. You can oppose the plebiscite. You can support the High Court challenge. You can talk openly about how fucked up and damaging this is.
But you have to vote.
Otherwise, Cory Bernardi and Lyle Shelton and Bronwyn Bishop and all of the dregs of the hard right conservative movement will win, and you will be in a worse position than you are now.
I’m sorry that you’ve been put in this position. The abuse has been ongoing for years, and it’s going to get worse before it gets better. But by voting “Yes” in this postal opinion poll to allow for a free conscience vote for the Liberal Party in Parliament at some stage in the next 12 months in a bill that may pass marriage equality in some form, you’re going to be able to shut them up.
They will be forced to accept that this is the will of the nation. 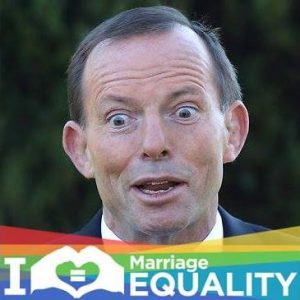 Obscure pop culture references and tepid takes on newsworthy events. It’s what your Nan would write if she was straight, white and male. In simple terms, Dean Cool is what you’d get if Andrew Bolt hate-fucked John Oliver in front of a middle-class millennial audience. So we gave him a weekly column.
You can find him on Twitter or at shutupandreadthis. He also writes single-tweet film reviews, but they’re not very good.