The best way to kick off BIGSOUND was by taking portraits of the lovely, bright and welcoming 4-piece band from Perth, Dulcie. A relatively new indie-pop act, formed in mid-2018, already leaving their mark on the Australian music scene. Catching the attention of Triple J after uploading their single ‘Fall’ to Unearthed, Dulcie have had a year filled with achievements.

With Triple J full rotation on their debut track, playing at Groovin The Moo Bunbury, main support slots on two national tours, and attending BIGSOUND, the band are swept up (and rightfully so) in the excitement of their music career beginning. Dulcie features Ashleigh Carr-White (keys and vocals), Saskia Brittain (guitar and vocals), Timieka Denton (bass and vocals) and Madison Hanley (drums).

Who are you most excited to see at BIGSOUND 2019?

This is such a hard question! There are so many incredible acts playing this year that we’re psyched to see. We’re super keen to catch up with Approachable Members Of Your Local Community- they’re awesome humans. Would love to catch Fergus James, Japanese Wallpaper and The Buoys. Then of course all the WA bands, there’s a great crew of WA musos heading over so that’s very exciting.

The most unbelievable experience. Playing at a festival that you grow up going to/wanting to go to is mindblowing to say the least. You’re trying to keep your cool and play a great set, act natural etc. then you’ve got some of your favourite bands that have influenced you as a musician wandering around backstage next to you… it’s a total spin out! We had a phenomenal time. 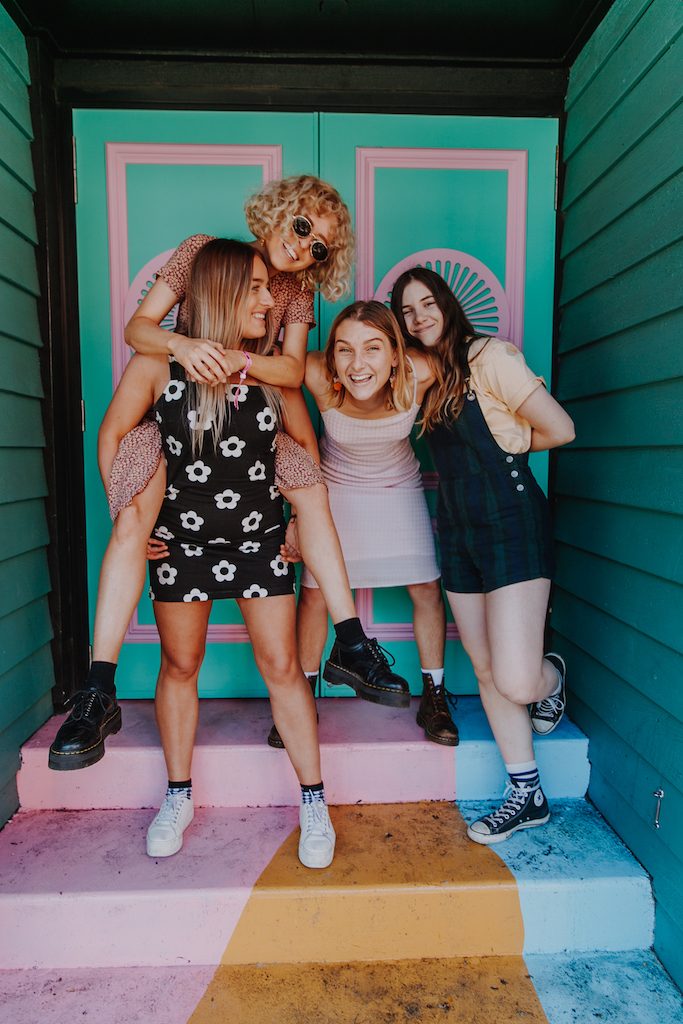 Patience and dedication. With each other, with ourselves, with writing, with touring and flights, soundchecks, scheduling! So important to keep a level head, especially while on tour! There’s so much going on and you’re not getting enough sleep or eating right. Touring is amazing if we’re all keeping a level head and feeling safe and good so that’s #1 priority.

There are soooo many good parts. One of the best parts would have to be writing a song that means a lot and all of us and spending time making it into something real. Then when we go to perform or release it and the song resonates with other people, other people developing the same meaning that our songs have to us for themselves.

When are you at your most creative?

That’s probably different for all of us so let’s do a survey!

Creativity comes naturally to me, I can’t force it upon myself. Sometimes I get lucky though and I surprise myself! I feel most creative when I am by myself in a space that lets me express the way I feel. I am always inspired by going out to live music and listening to music that I enjoy.

I find creativity flows in different ways, sometimes it comes from sayings or words that resonate with me that I see randomly or hear in conversation, I’m always inspired by listening to new music or going to live shows, but most of the time it flows when I’m being vulnerable with myself and draw from personal experience or the world around me.

For me personally, I feel most creative when the weather is sunny and warm, there’s something about the heat and sun that gives off happy and fuzzy energy I love creating when I’m at my happiest- so many ideas flow at that time & also when I hear new music!”

Definitely after I’ve been to see a great show and feel really inspired by what I’ve seen. I’m like “I need to go home and get on the drums” or I’ll get in the car and start just recording random ideas into voice memos.

Who do you look to for musical inspiration?

Each other, friends and loved ones, other musicians that we know. It’s a really beautiful thing being able to create in collaboration with other people- inside and outside of Dulcie. Then all of the music that each of us listen to in our own time ends up coming through in our playing and writing so it’s really cool to hear so many different influences come through too.

Who are you listening to at the moment?

Let’s do another whole band survey!

A lot of Aurora, Julia Jacklin and going through another Missy Higgins phase hahaha Who would you love to go on tour with?

Ocean Alley. Without a second thought. Since the beginning we’ve all shared a huge appreciation for their music so that would be a big bucket list moment.

You’re on a roll, what’s next for Dulcie?

We’ll definitely be jumping into the studio in the next few months to record, still writing all the time so hopefully some new tunes will be appearing in the set as we head into summer! Maybe even some new tunes being released…

Photos and words by Brooke Tunbridge