On the back of their heaviest album to date, SEETHER are intent on blasting the roof off with equal measures of ferocity and purpose. This is a band that knows how to connect with an audience, whilst delivering all the blood, sweat and sheer musical brutality that transports fans to a state of nirvanic rhapsody. Ahead of this tour, bassist/vocalist Dale Stewart had a few words with us to talk about their latest album, their tour and rock music.

You’ve recently released your album Poison the Parish and it’s said to be your heaviest record to date, how’s the reaction been to that so far?
It’s been really good. The last couple albums we did were more polished and we had a record label that pushed us in the direction that they wanted to take us. I think we just wanted to make something the way we wanted it to sound, rather than us having the second opinion, and it’s kind of a throwback to how we started out. We wanted to be loud and angry and heavy and that’s what we did. Back in the old days of house shows and parties nothing was polished and it was just fun to be there. It was fun that our new label let us go down this path and we’re really happy with all the positive responses.

Great to hear! Tell us about the processes that went into the recording and creation of the album?
Shaun [Morgan, vocalist/guitarist] spent a lot of time writing so when we all got together he had pretty much all the music written. We all just smashed everything out and learned our parts and got everything done. We cut down on costs heaps and it makes the songs better, if you spend too much on songs you might ruin it, it might turn out bad if you spend too much time or money. We just let the song exist as a snapshot of the time and our experience, it was self-produced and done within two weeks.

How does it feel coming back down under to play even more new songs?
I’m excited, I always enjoy coming to Australia. The fans are one of the best and getting drunk in Australia is always fun, since I usually play drunk. *laughs* I love the people, I love the country and I love the culture. I wish we could come more, it’s been three or four years since we’ve come and I really wish I could go Down Under more often.

What inspires you in music today?
I don’t know man, it’s funny. When you’re a student in high school trying to find your identity and everything, at least for me, music was such a big part of it. It kind of dictated who you hung out with and what you wore, the metalhead kids would all hang out with each other and the other groups would segregate each other. I listen to anything now, especially instrumental music like Mogwai and Explosions In The Sky. If you’re playing music every day, at the end of the night you put on something calm and easy to listen to and that inspires me and makes me feel something. That’s what motivates me.

Seether have been a band for a long time now, how has rock music and the scene changed to you since you’ve joined the band?
It’s changed so much , when we started out it was demo tapes and recording on tapes then pro tools and iTunes have come out and it’s gone crazy. On the one hand I can listen to whatever I want whenever I want, because nobody buys CDs anymore, but it’s kind of fucked up now because you spend money to record all this music and spend so much time making sure it’s perfect, but then people just go and steal it online. It’s like a double edged sword. So it’s kind of a bummer but I mean rock music has been through some weird shit, like the screamo phase and the punk rock phase and the nu-metal phase and everything, but I think now it’s in a great place and there’s a lot of rock bands that are great right now.

Do you have any parting words for your fans in Australia?
Thanks for supporting us and listening to the music and coming to the shows – and sorry it’s been so long! We’re excited to come, play and hang out, we love hanging out with Australians and drinking with them, so lets party and have lots of fun! 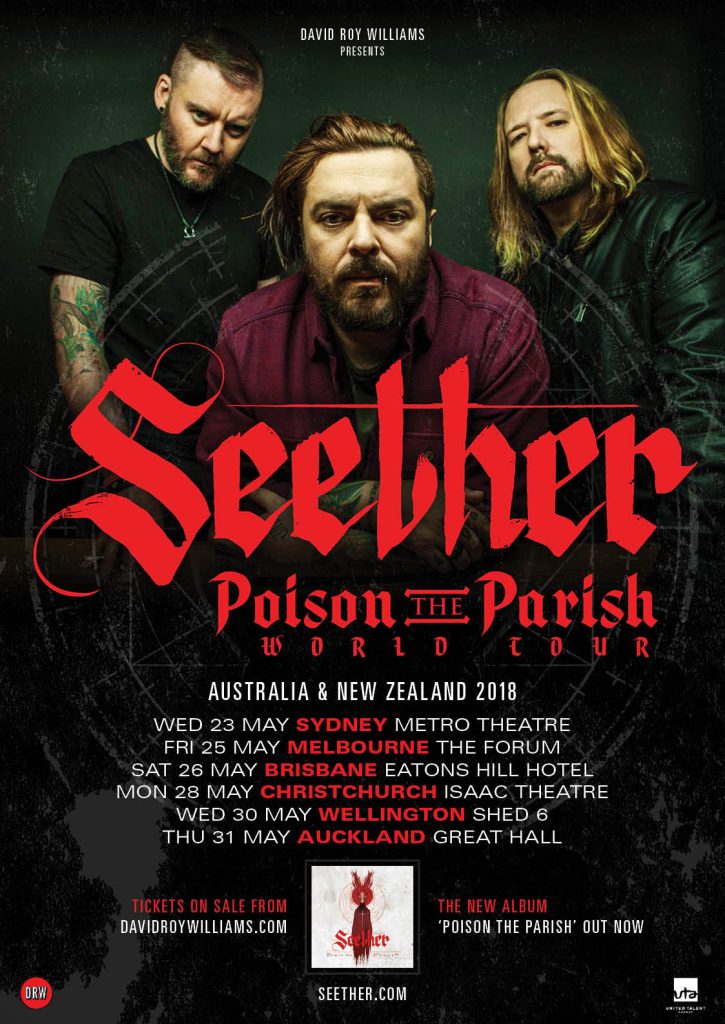