Construction is nearly complete and it’s time to throw open the doors to The Fortitude Music Hall, Brisbane’s newest live music venue and the largest ballroom/theatre-styled space in Australia! What better way to launch a future icon, than with the help of some of Brisbane’s current ones….

Brisbane’s melancholic pop masters Ball Park Music have become one of the cities most successful exports in the past few years. Ruling the radio waves and selling out shows across the country, released five albums, with the past four landing in the top ten of the ARIA Charts.

Ball Park will be joined by another one of the most recognisable rock acts to come from the QLD capital, DZ Deathrays will also play a full set on opening night. From playing house parties to opening for the Foo Fighters in stadiums, DZ Deathrays have a natural knack to get the party started and keep it going where ever they play, this has made them a staple favourite at festivals and live venues across the globe.

One of the most exciting new faces to be born from regional QLD, Tia Gostelow will open proceedings. Her single ‘Strangers’ has clocked over 4 million streams on Spotify. 2019 is looking to be a huge year for Brisbane’s newest resident, taking out ‘Album Of The Year’ at the QLD Music Awards and heading off on her first European tour.
Ball Park, DZ’s and Tia will handle the bulk of the duties to entertain, and we have invited a bunch of Brisbane music’s favourite sons and daughters to add their own iconic flavour to the official opening party…. 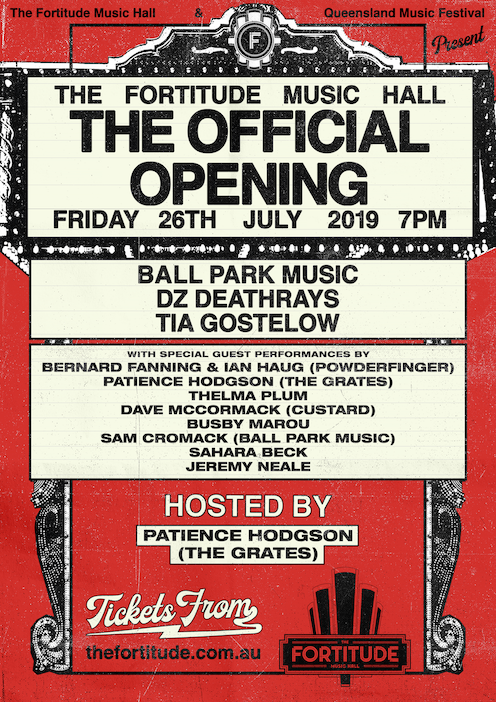 The Fortitude Music Hall is a truly visionary entertainment precinct for the city of Brisbane. In time will deliver additional food and beverage venues and function space, an important centerpiece of the masterplan to maintain Fortitude Valley’s position as a must-stop destination for local and international touring artists and an entertainment hub for locals.

Tickets are strictly limited and will not last long, we invite you to join us in bearing witness of the next chapter of Brisbane’s rich musical history!